For our first long-form Teahouse interview, we could not be more excited to present our special guest, who the whole crew are massive fans of: the incredibly talented OHYUNG, experimental rap artist and film score producer based in Brooklyn, NYC. Look out for their upcoming performance in Eastern Margins presents: ‘Respect Our Elders’ broadcast in collaboration with Boiler Room, airing June 20th.

| One question we want to get out of the way first is around how you make scores for films, alongside producing your own music. Which do you prefer?

Definitely making my own music. Film scoring, I love it, but it's ultimately the director's creative vision. I'll bring what I can to the table and say this is what I think this film could do, whether that's right or wrong. And so sometimes directors are like, do whatever you want - and that's really fun. And sometimes directors are like, this is exactly how I want it to sound, and then I have to do that. So it all depends on the project. That's why I don’t use the name OHYUNG for my film score projects, as it usually ends up being something different. A lot of the time the director’s right and chooses what’s best for the film. Comparatively, there's something about doing your own music where you can literally do whatever you want that feels amazing.

| So what sound does the OHYUNG name represent?

In the past, I've thought of it as very political and intentional - it goes everywhere, but it ultimately is rap music at its core. Although in the future, I'm thinking of all kinds of stuff that I want to do, like potentially an ambient record that I made a month ago and I'm trying to figure out what to do with it.

Through both my film music and my music, I think a lot about how this interacts with work I've done in the past, and how it sits with work that other people of colour are doing that I see and don't see. So there is a constant conversation in my head. On the one hand, I just want to do what feels good for me and to express myself. I like to try and surprise myself with OHYUNG - and OHYUNG is definitely very collaborative. I try to uplift as many QTPOC as I can. I'm really interested in finding weird people of colour on SoundCloud who just have the most ridiculous sound, and get them on a track and amplify them somehow. That's something that I really enjoy.

| How did your recent collaborations come about?

So Qing Liberty [who OHYUNG collaborated with on their song ‘Shenme Gui’] is funny because Qing is a Chinese word, but she uses it as a misspelling of King, like King Liberty. Also she’s not Asian, she’s Black. But we met because she was working at a coffee shop my friend went to and they were talking about how she’s an avant garde rapper. My friend then said you should talk to OHYUNG, so she DMed me. I was having my release show for the first album in 2018, when I made Untitled (Chinese Man With Flame). She showed up and was just moshing in the front then at the end she said I need to get on one of your tracks. I didn’t know who she was, so I asked if she had anything online - she said no. I told her you have to record something so I can hear it. She never did, but we followed each other on Instagram and then she uploaded a 30 second clip of her rapping at a show - and then I realized, I can totally work with this, she sounds awesome. We also have a lot of the same people that we listen to, so I knew I liked her taste. I got her on the track because I knew she would bring that energy.

With Space Meow Doll, I did what Qing Liberty did to me, where I just showed up at her show. I think she was a little creeped out. Because we had never met before and it was one of these little shows where there's five people there. But she just has a really interesting energy and we got along really well. I played her the track when she came over - my Mandarin is pretty bad but she’s from Taiwan and we talked about different phrases. I just played the song for five minutes and she would just shout different phrases over it - and then later we collaged it together.

There’s this band called the Trippple Nippples from Japan who were big a while ago and they were really incredible. They inspired this song, because they had this really intense party, electronic vibe that was very sugary. I just wanted to mix that with rage and punk. A lot of the PROTECTOR album was made to be performed live, but I never got the chance [because of lockdown].

The first thing I want to do post lockdown is have the release show that I didn't get to have for PROTECTOR. The other thing is, have a big dinner in Chinatown with my friends. So many places there have closed since the beginning of the pandemic. There's a constant battle of gentrification in Chinatown where when a store closes, an art gallery will buy it up or rent it out or it will start being turned into condos. So people are really worried that the pandemic is going to speed up gentrification. 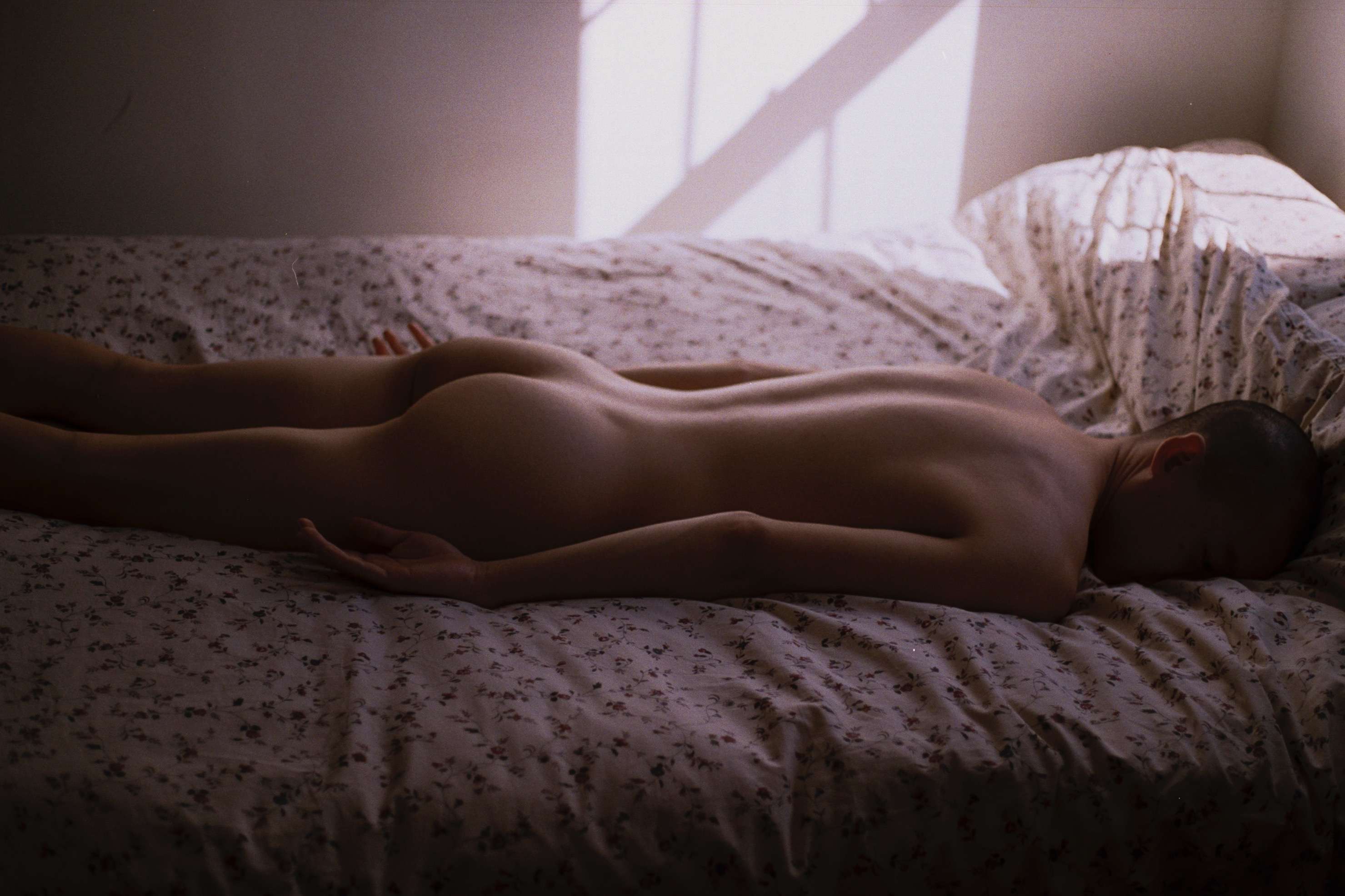 | Has the recent resurgence in anti-Asian sentiment [e.g. attacks like the Atlanta shooting, or attacks against the elderly] affected you at all?

At the beginning of the pandemic, I definitely felt it. My partner was very worried and I was tense going out at the beginning, I was ready to get into a fight. Things definitely happened to people I knew, for example my friend who was on the train had someone say something really threatening to him - that was the first few months. But then I think my brain just shifted into pandemic mode, and I started getting involved in mutual aid [community assistance program] in my neighbourhood in Bushwick.

While I know there is an increase of random attacks on Asians in the States, what I can control is supporting people in my neighbourhood, like packing groceries once a week - which I’ve started doing since last May. I’ve been getting more involved in that and supporting largely Latinx and Black communities in Bushwick. My first foray into awareness of racism and political awareness was a decade ago, living in New York - I learned about Danny Chen, who was a private in the military and was hazed violently and committed suicide. No one was brought to justice and I got involved in the political organising of that campaign. I was also politicised by going to a film screening in Chinatown about the murder of Vincent Chen in Detroit by a white person who thought he was Japanese, and a lot of white Americans thought the Japanese were taking away automation jobs. They got in an argument in a club and the guy murdered him and didn’t spend a day in jail. Watching a documentary on that was the beginning of how I got involved in social justice. That awakening around violence against Asians was a gateway that got me into all sorts of intersectional social justice.

There’s a group in Chinatown called CAAAV [www.caaav.org] that does really great work - they originally started in the 70s as the Committee Against Anti-Asian violence. They started out working against police abuses, but nowadays they do a lot of work organising tenants in Chinatown against evictions and it’s important to think of housing and systemic issues as violence as well. Violence takes lots of different forms, eviction is violence. So these recent attacks are terrible but they come with a long history of other types of systemic violence. I’ve seen so much commentary that points it all directly at Trump, but he was just tapping into something - that violence was already there, he didn’t just create it out of nothing.

| How do your socio-political interests affect your music?

Well “All Uniqlo” [from the album ‘Untitled: Chinese Man with Flame’] is just complete capitalist satire - it was meant to be like one long advertisement. “Park Slope” is obviously right in your face. “Untitled” [OHYUNG’s debut album] was definitely a different time in my life - everything felt so visceral and I wanted to put it all in the album. It was commentary on everything. Whereas “Protector” [OHYUNG’s sophomore album] reflected more what I was feeling internally. I got more into my head in terms of anxiety and self-doubt, but also still touching on political issues like racism and gender identity, and exploring all that in the music. I’d describe “Untitled” as very external and “Protector” as more internal.

| Lastly - what is your favourite song on your 2020 album, PROTECTOR?

My favourite is ‘ga ga ee’ for a few reasons - I think it’s just an expression of pure joy. Working with my friend Hye Yun who sings on it was just so fun. I got an idea for it because she had posted a clip of her singing karaoke on Instagram. So she came over and we started playing with different melodies. I was very inspired by the theme song for My Neighbour Totoro [anime Hayao Miyazaki film]. I was like - I fucking love this song, it goes so hard and I want to take this beautiful, child-like melody and flip it into a drum and bass banger - so that was the beginning of that thought. And then I really struggled with it for a long time - there were so many different parts and layers that I just couldn't get the mix right. So I reached out to a friend on Instagram, Elevation, who's an incredible internet jungle producer. I said, my drums don't hit hard enough, they're not interesting enough. So I sent it to them and they did some tweaks, and sent me all these different drum sounds and things that they added to it and a bass line… they completely gave me new ideas. It really lifted the song and felt like a triumph: I thought I couldn’t do this song and then I made it over the finish line with Elevation’s help. It was a challenge to work on and brought me a lot of joy when it was done. It’s one of my favourite songs on the album.

LISTEN: OHYUNG’s latest album in collaboration with Matt Evans ‘GODLESS’ is available to purchase on Bandcamp and stream on Spotify.